The Chucao House is located in the Los Ríos region in Chile, on a land that faces the North shore of Lake Calafquén. The property is predominantly on a steep slope that runs into the lake. A determining condition for AB Estudio at the time of designing this project was the client’s request that all living quarters should have a view of the lake and that no bedroom’s design should be considerably unfavourable with respect to another.

A design scheme in the shape of a ‘Y’ (Greek ‘i’) has been chosen, arranged longitudinally in the direction of the elevation of the land, taking care not to affect the existing trees. In this way, the program was resolved in such a way that all the bedrooms and common areas have a view towards the lake. The common areas are integrated in a single open space, with bespoke furniture and the house’s chimney being the elements that control the program, providing separating elements between living and dining rooms, and the kitchen. 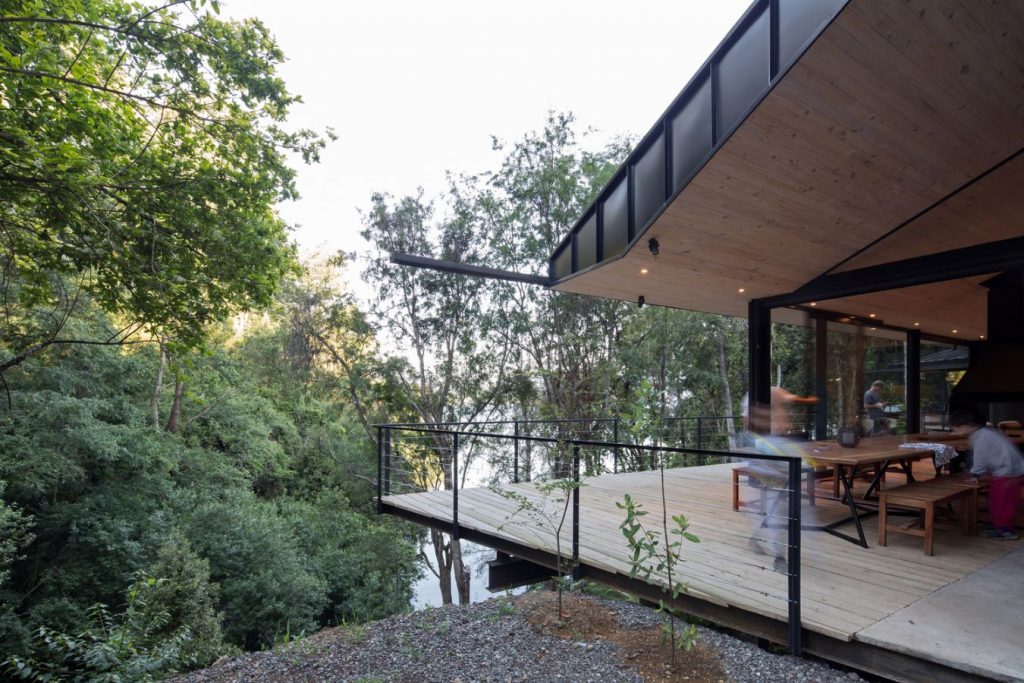 The house volume is built with two sloping roofs that overlap; a higher roof for the bedrooms and common areas towards the lake, and a lower roof that covers entrance, circulation and service areas. A sliding window covers the gap between both roof systems, allowing the entry of natural light from opposite directions. The eaves generated by these roof covers provide protection against intense rain, typical of the Los Ríos region, control sunlight entrance and allow for the creation of intermediate spaces that provide a seamless transition between exterior and interior areas. 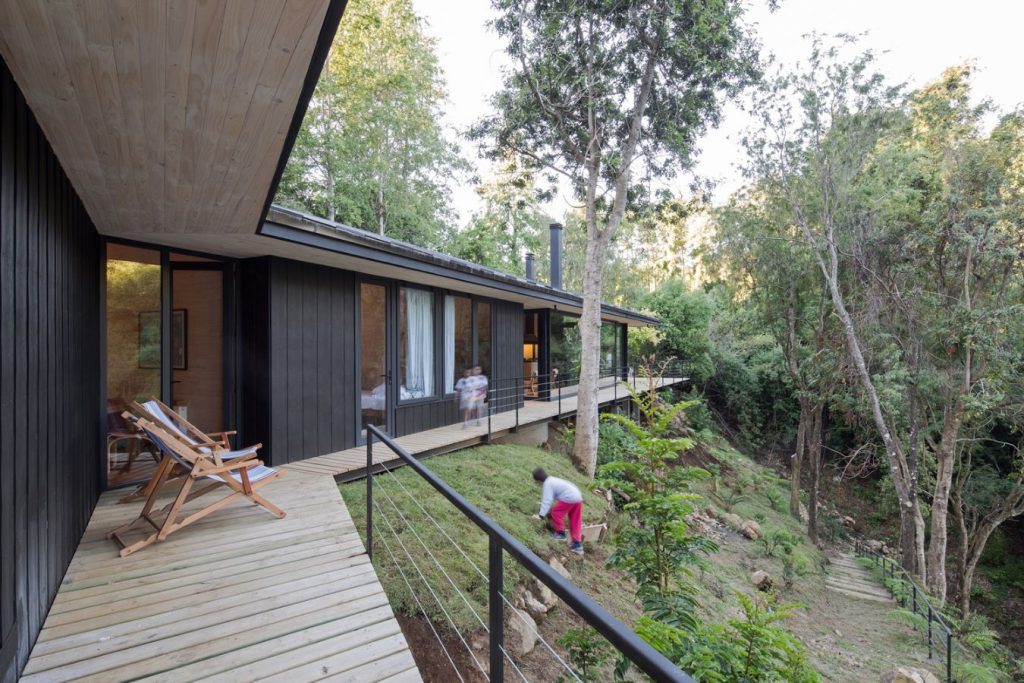 The ‘Y’ volume and overlapping roof covers are clearly visible, both from the inside and the outside, favouring the decisive nature of these design operations in the resolution of the architectural design. 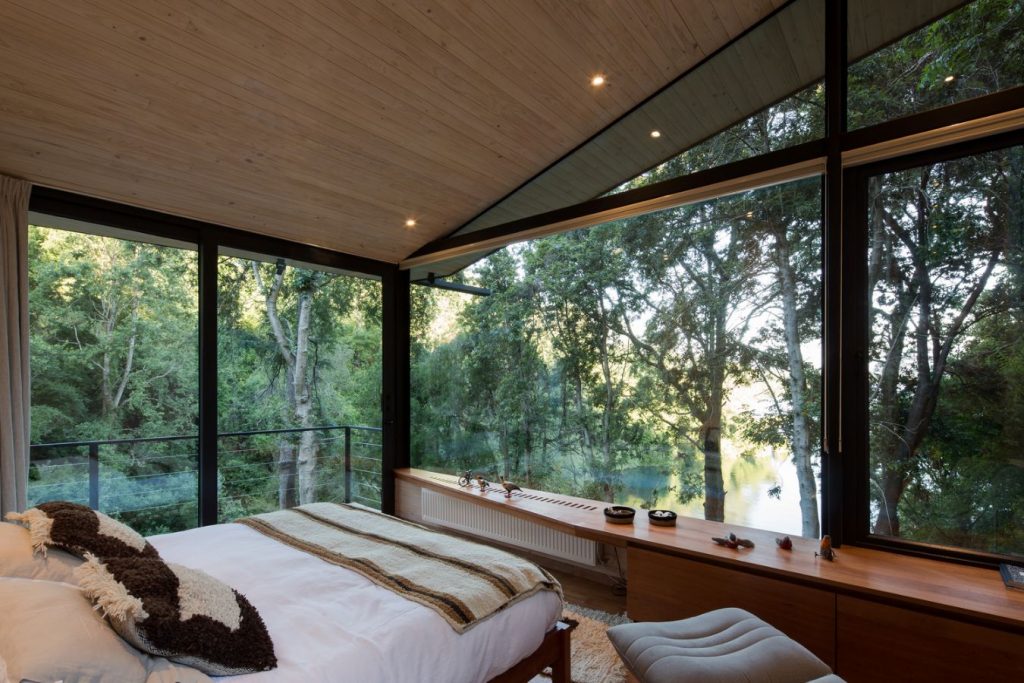 From the outside, when approaching the house’s main entrance, one can appreciate the project’s volume through the meeting of planes formed by walls (in bedrooms) and a window wall corresponding to the distribution hall of the house and which frames the main access, along with a slightly diagonal wall. From the lake, the planes become transparent, the walls give way to the windows, allowing for the views. In the common area, the sliding windows are superimposed and stored inside the walls, allowing the integrated common space corresponding to the living room-dining room-kitchen, to be completely open and exposed to the exterior. 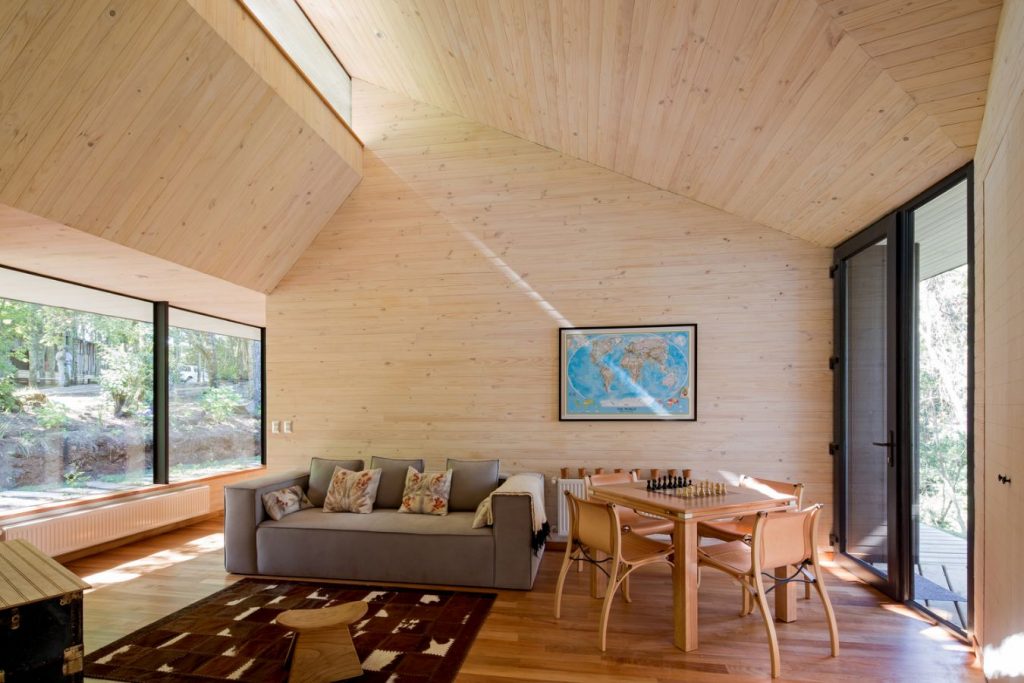 From the inside, the sloping roof and the large sliding window determine the spatiality and character of the enclosures and, in the case of the children’s bedrooms, also determines the program, by allowing the appearance of a loft where two beds are provided. 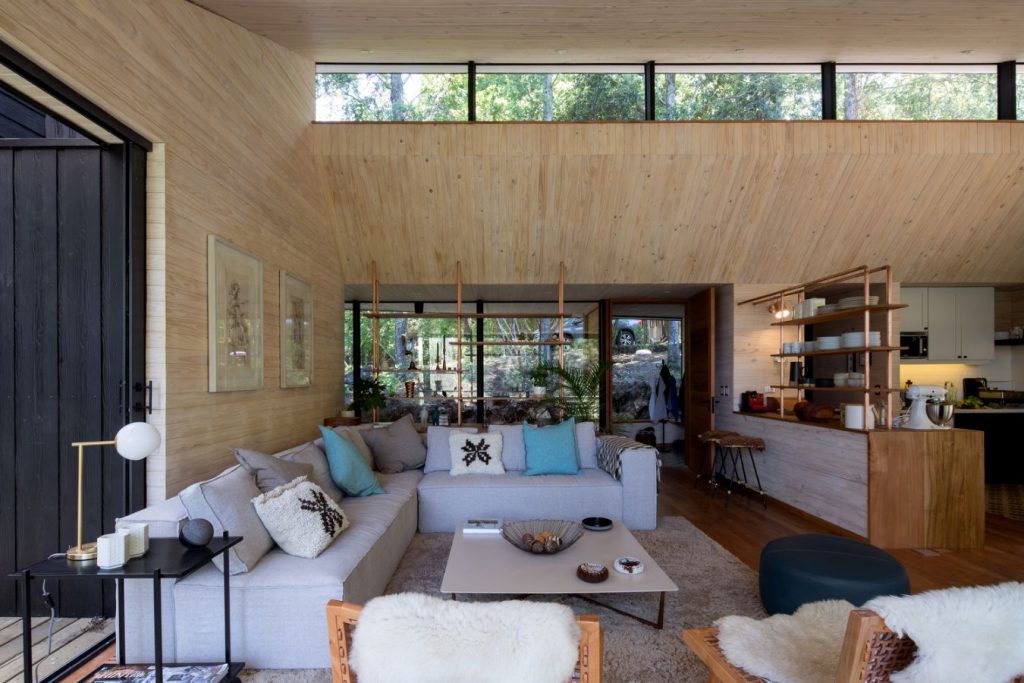 The bathroom ventilation is solved naturally through interior patios. In this way, the architects were able to include large windows, without these spaces being directly exposed to the outside environment, and avoiding their location in the house perimeter, for which the views were privileged. 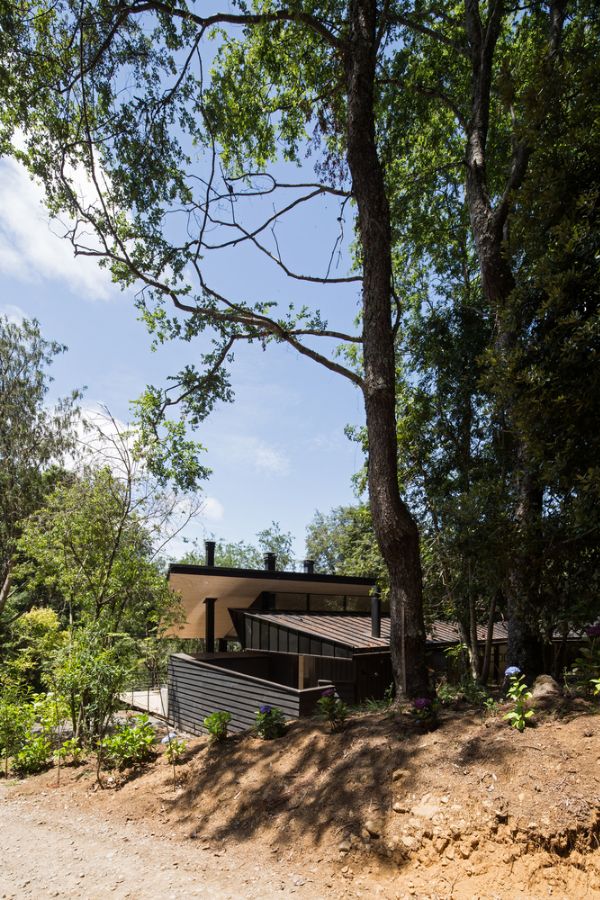 All the furniture was designed in accordance with the architectural design of the house, and built in beech wood by local carpenters. 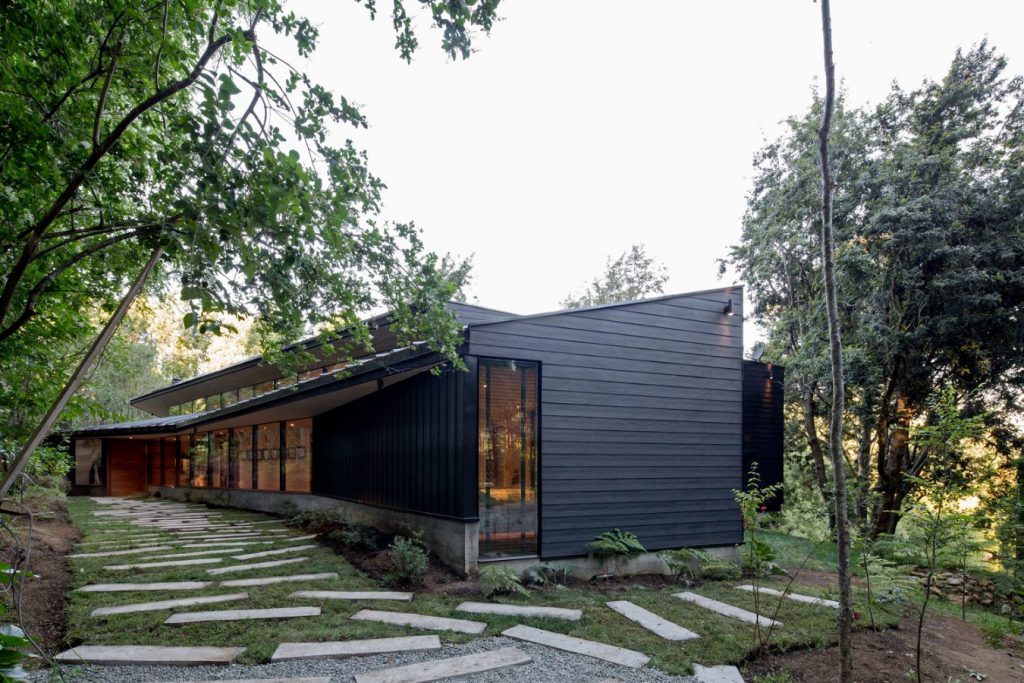 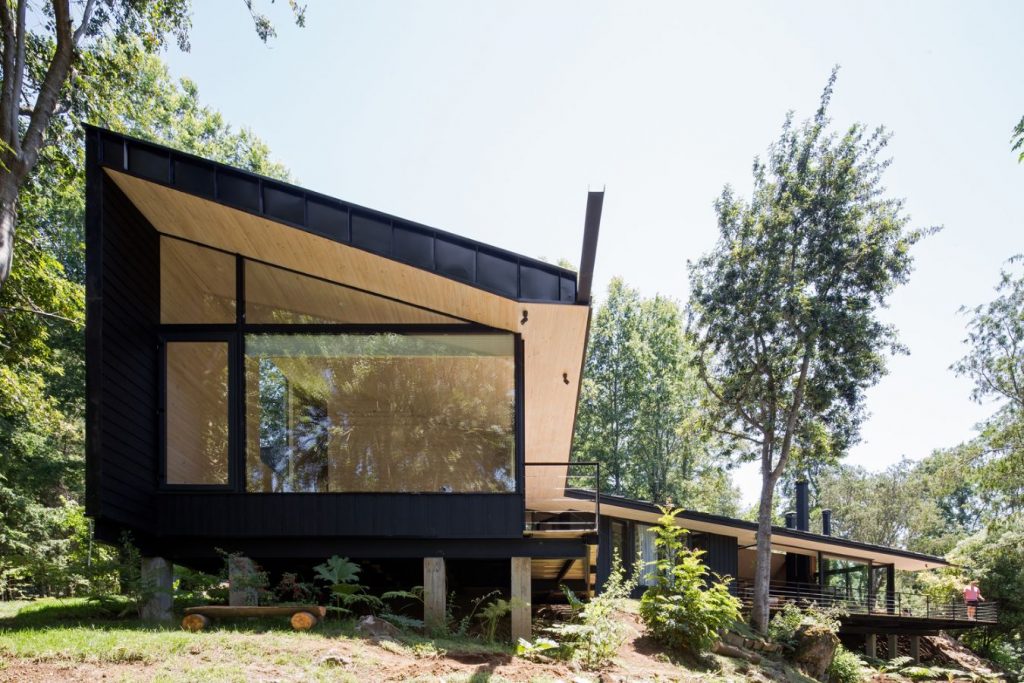 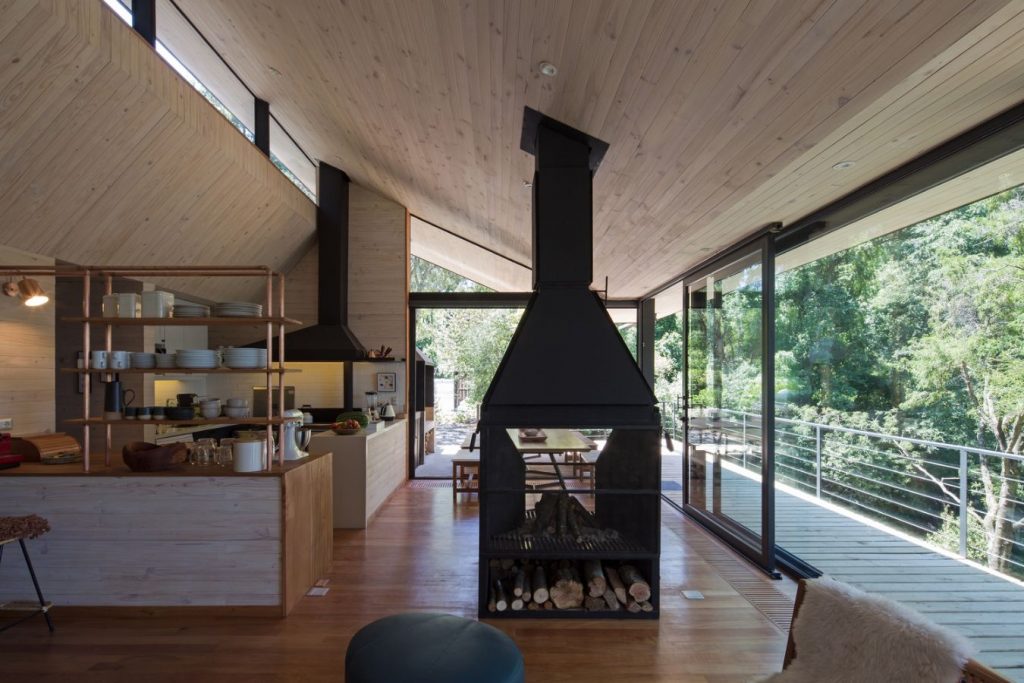 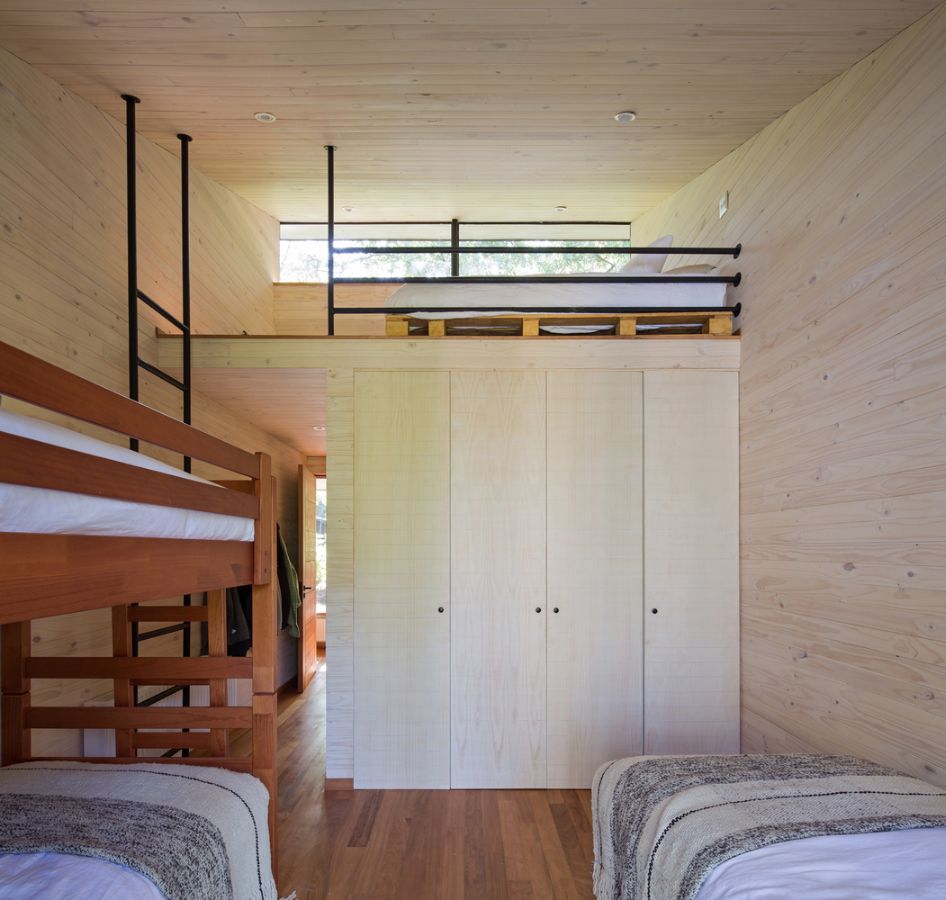