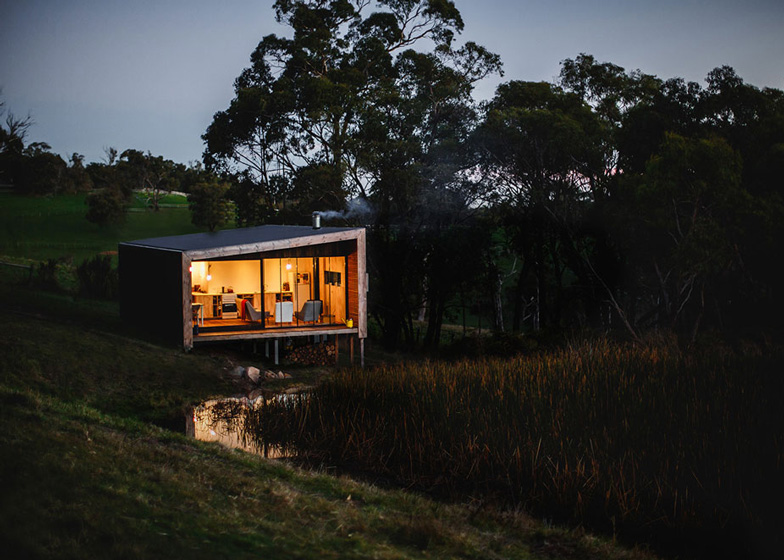 Branch Studio Architects:  “An architectural outcome is the product of a lengthy design, documentation & construction process where the ‘vision’ is communicated to both client and builder predominantly through detailed drawings and a paper-trail of addendums, RFI’s & variations.“ 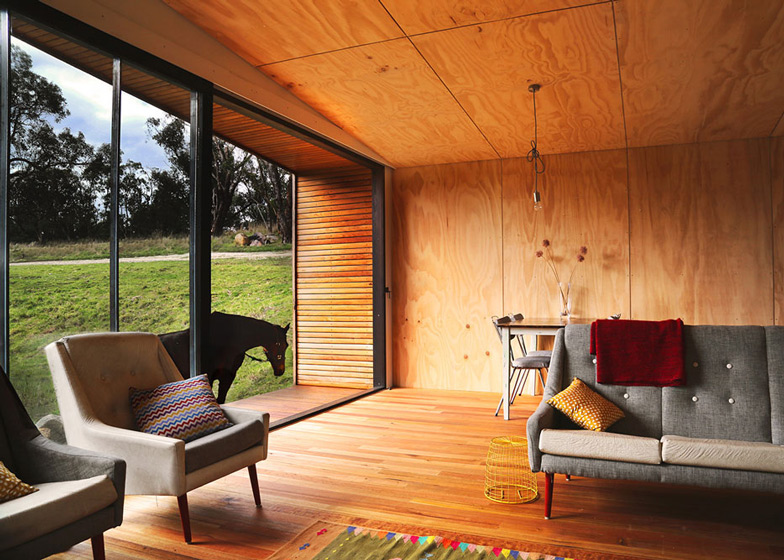 “The Pump House was different. Constructed and largely conceptualised by the owner on free weekends and rainy Mondays, the compact, re-locatable structure is more a product of rigorous discussion than that of resolved drawings… that’s not to downplay the careful consideration that was applied to the details of the house, it’s just that the way this project evolved meant that things could, more often than not, be resolved through a conversation on site and detail etched into the clay with a rusty nail.“

“The nature in which this project was realised meant that our involvement was quite informal as we were consulted with on an ad-hoc basis during the design & construction solely in regards to architectural detailing and the overall architectural outcome. It was exciting to be involved in a project where we could focus purely on the aesthetic and architectural outcomes of a building.“ 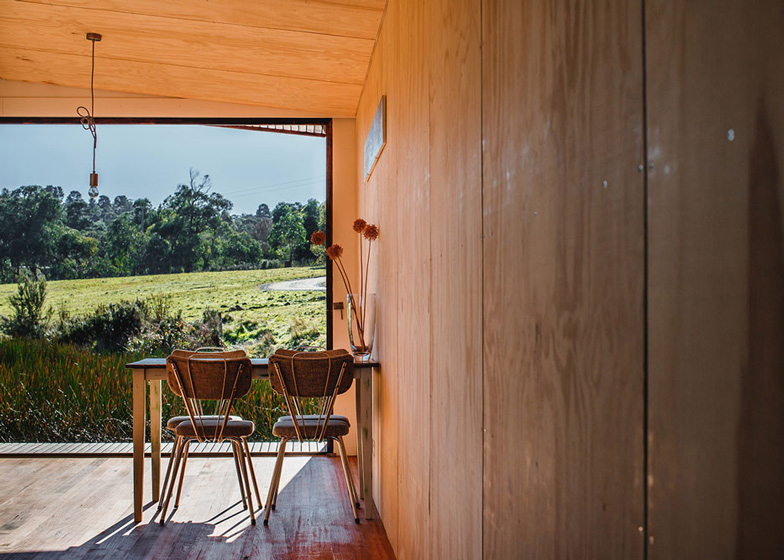 “Having worked on a couple of challenging projects with the owner (a carpenter) previously, we often found ourselves deliberating over ideas revolving around establishing a methodology to design & build small scale structures that would achieve both a simplicity of construction as well as a successful architectural outcome. We regularly discussed the possibility of developing an architectural alternative to the conventional ‘off the shelf’ house and we were united in our refusal to concede that architectural detailing, simplicity of construction and affordability were mutually exclusive.“ 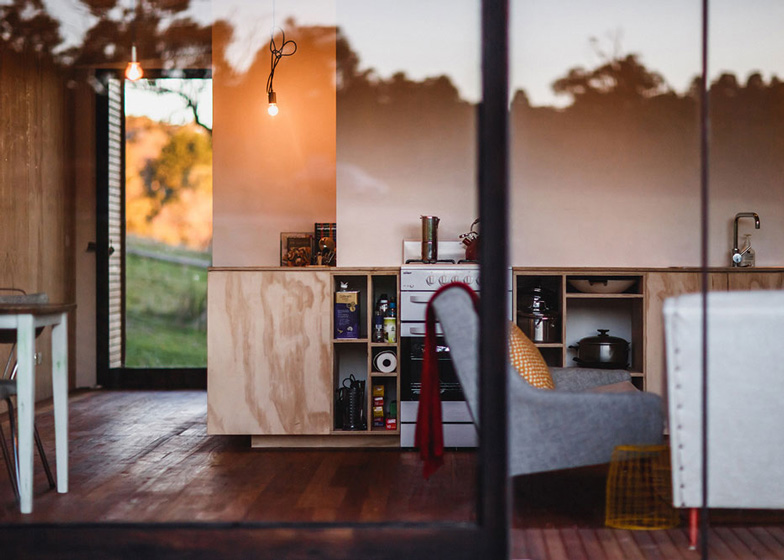 “The Pump House was driven by the intersection of these three prerequisites – it had to be a considered response (architectural detailing), it had to be easy to build (simplicity of construction) & it had to be cost effective (affordability) – and in many ways is an architectural prototype that tests our responses to these age old dilemmas… it’s very much like a 1:1 concept model based on ideas which evolved through our discussions and previous experiences.“ 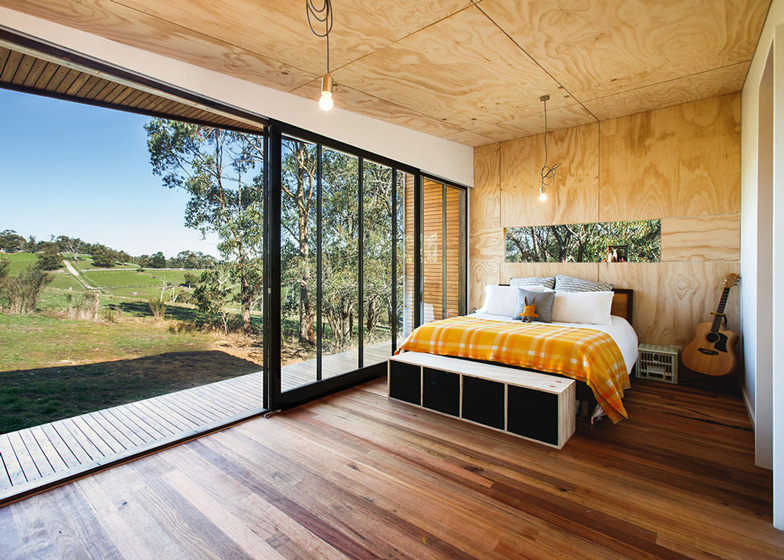 “The Pump House is a celebration of the ordinary. Uncompromising in it’s simplicity, there is a rigid adherence to some very modest but key ideas about doing away with the unnecessary. Agricultural materials (Colorbond iron, low-grade plywood & rough sawn timber) are put together with carefully considered old-fashioned craftsmanship (custom made on-site windows, doors & joinery) to create something much more than the sum of their parts. In plan, the compact internal spaces arranged simply around a central service core provide only the very basic requirements of uncomplicated living, an idea that is reinforced by the uncomplicated nature of the architecture.“ 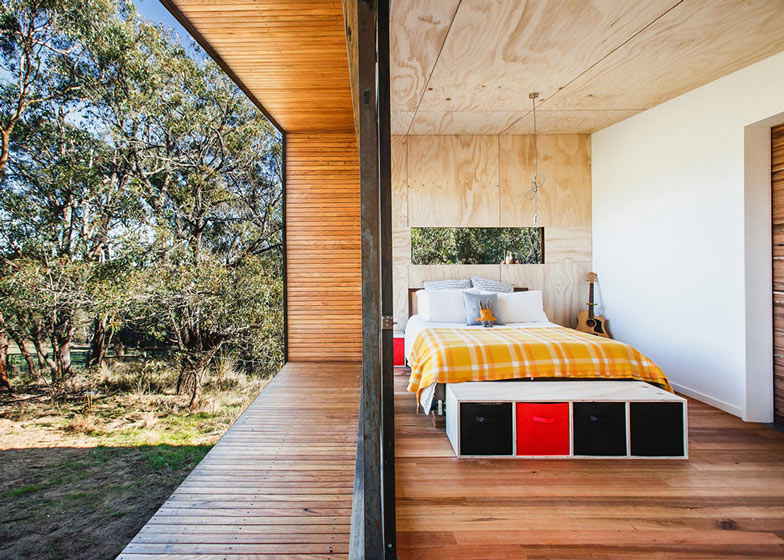 “A semi-permanent structure, the Pump House sits softly on its site adjacent to a large dam and on the threshold between the open paddocks and the bush land surrounds. Large expanses of glazing along with a North/South orientation allow the sunlight and the wide-open green spaces to penetrate into, and seemingly pass through, the internal volume giving the condensed areas a sense of spaciousness. The formal gesture of the black box external shell creates a robust metal ‘cocoon’ within the landscape that is directly contrasted by the warmth of the timber lined internal spaces. A large horizontal window along the western facade provides the only penetration of the metal cocoon while also allowing afternoon light to filter through the dense treetop canopy and into the spaces.“ 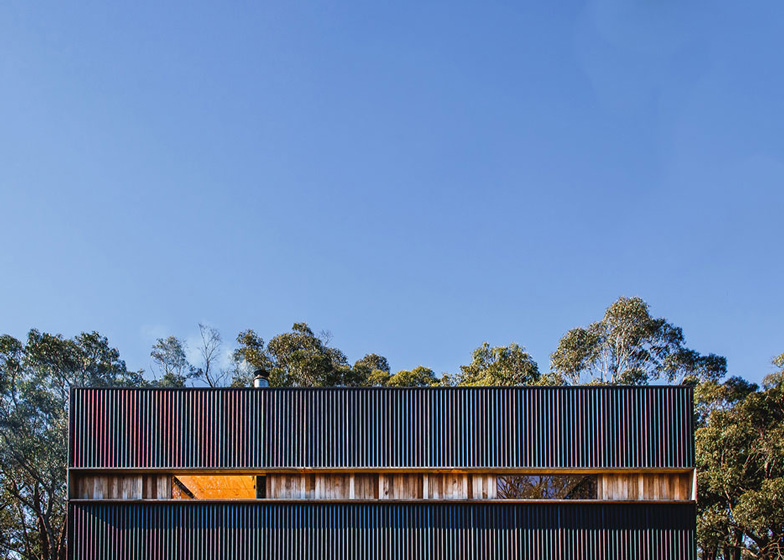 “The original brief was for a temporary shed-like space to house the water pump and other farm equipment as well as to provide the owners with somewhere sheltered to have a cup of tea when they came to hang out with George (their horse) on the weekends …and although the project eventually developed into something slightly more extravagant, the modesty of the original ambition is still evident in the ‘no-frills’ detailing and rugged materiality of the finished building.“ 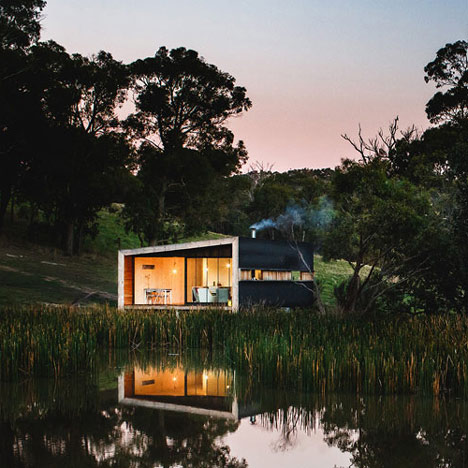 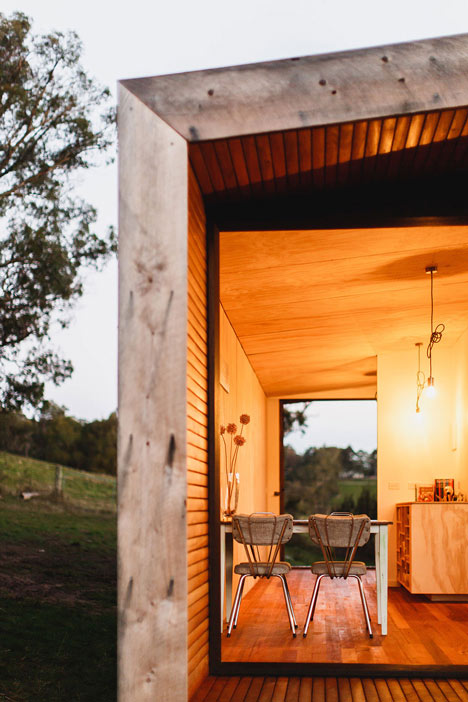 Photography is by Lakshal Perera